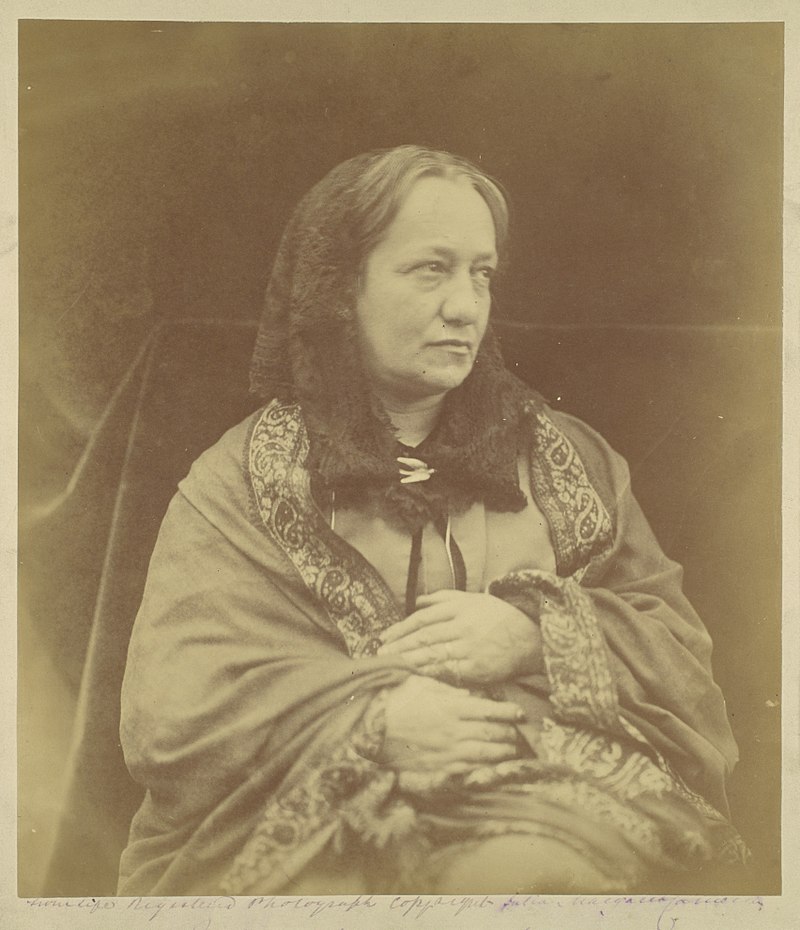 Julia Margaret Cameron is one of the historic faces of photography of the 19th century. She was born in 1815 in Calcutta, India, where her father was working for the East India Company. Sent to France for her education she returned to Calcutta in 1834. She met Charles Hay Cameron who was a reformer of Indian law and education, twenty years her senior and married him two years later. Julia became a well-known hostess of the Anglo-Indian society. Her relationship with photography seems to have started those years, when Sir John Herschel informed her about the invention of photography and sent her daguerreotypes and calotypes, the first photos she had ever seen. In 1845 the family moved to England where they became part of an artistic circle.

Julia’s first camera was gifted to her by her daughter and son-in-law in 1863. Cameron saw her work in a professional way; she established a home studio and became a member of the Photographic Society of London in two short years. She also became a member of the Photographic Society of Scotland and sold her prints all over Europe. Her husband was highly supportive of her feats in the photography world, being the first to see and comment on Cameron’s work on a daily basis. Her success was so big that the Victoria and Albert Museum purchased eighty of her photographs and offered her a two-room studio, making her the museum’s first artist in residence.

Cameron’s photos were mesmerizing, soft and delicate, often inspired by the Renaissance, the pre-raphaelite period and the Shakespearean tales. It comes as no surprise that in the spirit of her times she focuses on beauty when she photographs women and genius when it comes to men. Her subjects were often famous poets, writers, scientists of her time. She said herself that when she photographs them “my whole soul has endeavoured to do its duty towards them in recording faithfully the greatness of the inner as well as the features of the outer man. The photograph thus taken has been almost the embodiment of a prayer.” She even photographed Darwin and Henry Taylor. She also used to dress up kids and older women to photograph them as angels or other allegorical figures. Another big theme in her photographs is Madonna, for whom she created more than fifty images. In 1874 she was asked to create a series of photographs based on the Arthurian tales of the poems of Alfred Tennyson.Although she was unhappy with the finished product herself, her photos for the Idylis of the King are some of her best photos all in all.

The beauty of her photographs is unreal and her out of focus style creates dramatic tension that is rare to find in works of her time. Cameron made art in a time where pictorial photography was starting to become the norm. “I began with no knowledge of the art,” she wrote. “I did not know where to place my dark box, how to focus my sitter, and my first picture I effaced to my consternation by rubbing my hand over the filmy side of the glass.” Cameron certainly accomplished a lot during a short amount of time in the photography world. “From the first moment I handled my lens with a tender ardour and it has become to me as a living thing, with voice and memory and creative vigour.”, she wrote of her love for photography. Her influences include none other than Titian, Raphael and David Wilkie Wynfield. We invite you to watch the comparison between the renaissance painters and Julia Margaret Cameron’s photos. The resemblance to the paintings is striking, the poses of women are clearly inspired by the Madonnas of the Renaissance painters. And Cameron has nailed the chiaroscuro technique in another medium; the high amount of contrast reminds us of the chiaroscuro master, Caravaggio. Even though Julia Margaret Cameron lived in the 19th century and given the almost primitive stage of the use of photography for artistic purposes, she was one of the brightest talents of the photography world and produced a wide body of work that is still a reference point for many young and older creators.